Hamarikyu Gardens – Beautiful Edo-Period Garden in the Middle of Tokyo

Edo-Period Paradise Connecting the Sea and the Land

“Hamarikyu Onshi Teien” (Hamarikyu Gardens) is located in the heart of Tokyo and is full of nature. It is also known as an oasis in the city centre and has been loved by many people since ancient times. It is very popular as a sightseeing spot that can be easily enjoyed on a day trip from anywhere in the centre of Tokyo.

Hamarikyu Gardens consists of a vast garden and the Metropolitan Expressway to the west end. It is within walking distance from Tsukiji, Shiodome, and Shimbashi. It has good access to Toei Oedo Line and Japan Railway. Surrounded by the buildings of Shiodome, the greenery spreads like a gap. Facing the Sumida River, it is a secret spot where you can see the Rainbow Bridge in fine weather.

Hamarikyu Gardens is a cultural property that allows you to feel the taste of history as it is a garden related to the Tokugawa Shogunate, as well as the size of Tokyo Station. The garden is decorated with greenery and seasonal flowers, and because it faces Tokyo Bay, the ponds inhabit the goby, mullet, jellyfish, rays, and eels that spawn in the sea. And if you look overhead, a seagull will fly comfortably. It is a scenery that seems to make you forget that you are in Tokyo.

Many Aspects of the Gardens

While you relax in the gardens’ natural beauty, the garden has many points of interest for you to explore. Near the entrance is an impressive 300-year-old pine tree very carefully pruned over the centuries into an impressive weeping expanse, and beyond that is the flower field which offers nearly year-round blooms including vibrant peonies and cosmos.

The gardens were a duck hunting ground for the Shogun, and there is a grave built to commemorate and console the spirits of the ducks that have been caught in the grounds. You can still see traditional duck blinds from behind which the ducks were shot scattered throughout Hamarikyu.

Beautiful Foliage Without the Crowds 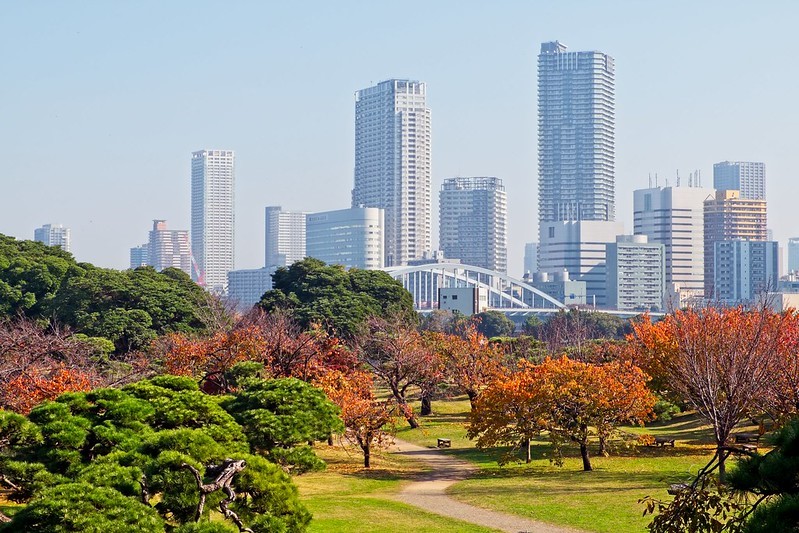 Compared to some of Tokyo’s other gardens, Hamarikyu is not known for its spring and autumn foliage. However, from late February to early April you can view blossoms without fighting the crowds, as the garden still houses an abundance of plum and cherry blossom trees blooming in pink and white during spring. The same is true in the autumn, as the maple and ginkgo trees illuminate the garden in dazzling reds and yellows. 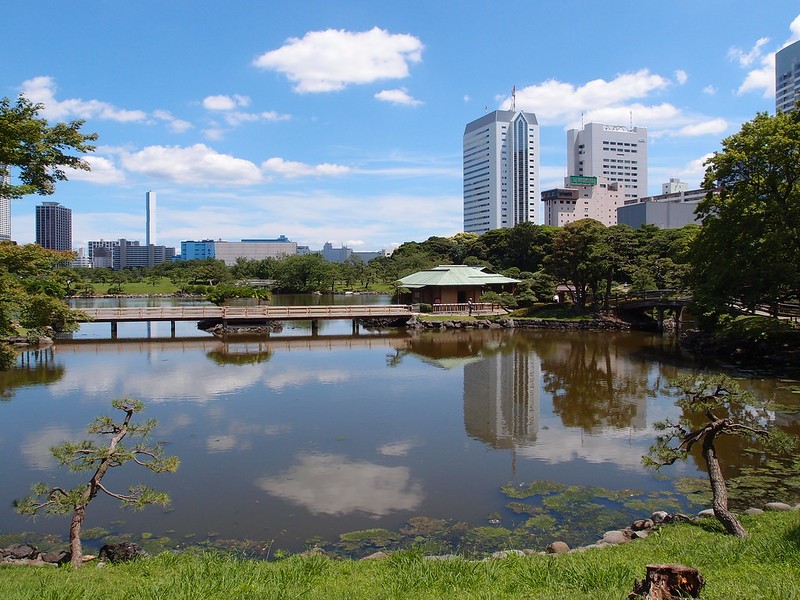 The garden’s central pond, Shioiri, is more than it seems. With its Japanese name translating to “with salt,” the pond is actually filled with seawater drawn in from Tokyo Bay. Sluice gates are used to regulate the water level by working with the rise and fall of the tide, so the pond changes throughout the day. Make sure to look into the pond when you visit as you may catch a glimpse of the marine life brought in from the sea, including sea bass and black mullet.

Appearing to float on the pond is the teahouse. Here, you can partake in the ancient Japanese art of tea ceremony. Sitting in these traditional surroundings on the tatami mats, you can enjoy a relaxing cup of powdered green tea served with an authentic wagashi sweet. If you don’t have time to spare for a full tea ceremony, the atmosphere alone provides a rewarding experience.

Due to its location along the Tokyo Water Bus line, Hamarikyu makes for a great stop between a visit to Asakusa’s traditional temples and Odaiba’s ultra-modern entertainment. Traveling the city this way is a lovely, scenic alternative to the underground subway lines.

You can access the garden via a 15-minute walk from Shimbashi Station.

Alternatively, the garden is a five-minute walk from Shiodome Station on the Oedo subway line or Yurikamome Line.

The park is a stop for the Tokyo Water Bus. The Sumida River Line of the Water Bus runs from Asakusa to the garden, and the 35-minute trip makes a refreshing change to the subway. The entrance fee to the grounds is included in the fare, but be aware that you cannot travel back to Asakusa via Tokyo Water Bus from the garden, as it goes on to Odaiba. Instead, take the short boat trip to Hinode Pier and then board a boat back to Asakusa.

“Hamarikyu Onshi Teien” (Hamarikyu Gardens) is located in the heart of Tokyo and is full of nature. It is also known as an oasis in the city centre and has been loved by many people since ancient times. It is very popular as a sightseeing spot that can be easily enjoyed on a day trip from anywhere in the centre of Tokyo.