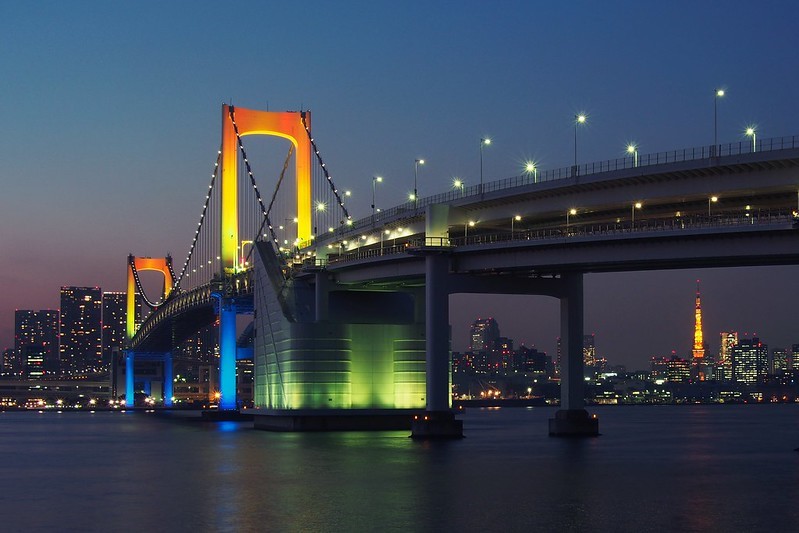 Rainbow Bridge is a huge and beautiful suspension bridge in the northern part of Tokyo Bay, connecting Odaiba to central Tokyo. Odaiba is ultra-modern, manmade island that is incredibly popular with tourists. Since its opening in 1993, the brightly lid Rainbow Bridge has been one of the iconic symbols of Tokyo. It is prominently featured in photos and videos and used in many TV dramas and movies.

The suspension bridge is 798 meters long and stands 52.4m meters above sea level, with two 126-meter towers supporting the construction. It is a two-story bridge that carries different transportation lines; road traffic can cross the bridge as well as the Yurikamome Line, a driverless, automated transit service. There is also a walkway for pedestrians. This amazing bridge has become a major tourist attraction offering panoramic views of the Odaiba waterfront, that beautifully illuminated at night.

The Rainbow Bridge was constructed by Kawasaki Heavy Industries. The construction of the bridge began in 1987 and was completed 6 years later in 1993. In order for the ships to pass through, it had to exceed 50 meters in height, but its height was also limited because of its proximity to Haneda Airport. This truss deck suspension bridge is made with vertical steel cables to support its dual decks. Coloured in white, the towers of the bridge were designed to harmonise with the skyline of central Tokyo as viewed from the Odaiba standpoint.

The bridge is famous for its illumination at night, when it is showing its wonderful colours that depend on the day and time. Every day, after sunset, the 444 lights brilliantly illuminate the bridge in the dark. The suspension cables are lit either white, green, or coral pink, while the bridge’s towers transform seasonally, showing different shades of white. The illumination colour of the main tower shows a cool white in summer and a warm white in winter. Solar panels charged up during the day, stay on from sunset to 12am and the lights between the suspension towers move rhythmically while changing colours. The light-show patterns differ on weekday and weekends. But during the entire month of December and into early January, the towers are lit up in rainbow colours. The colours reflect beautifully on the white supporting towers. 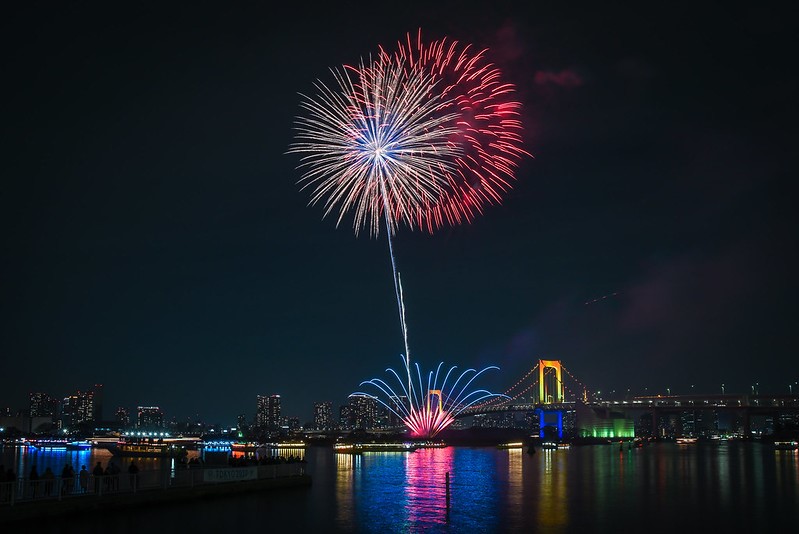 Every Saturday in December at 7pm, there is a firework show right next to the bridge at 7 pm and every year on August 26, Rainbow Bridge Day is celebrated. In addition to the special December illumination, this symbolic bridge occasionally displays different colours for various specific events. For example, pink for the Pink Ribbon Day in October or blue for the World Diabetes Day in November. The bridge’s symbolic illumination was also used during the rise of COVID-19 cases in Tokyo when it was lit up red for some period of time.

Viewpoints of the Rainbow Bridge

There are numerous viewpoints around the bridge, listed below are a few great spots where you can take perfect photos.

One super spot is the Hachitama Spherical Observation Room on the 25th floor of the Fuji TV building (admission ¥700 yen for adult). Here you can enjoy a 360 degrees panoramic view of the Tokyo Bay, including the bridge. Tripods are allowed here for making amazing time-lapse shots in the evening.

Some other good vantage points are along the bridge walkway, where there are several observation decks. The North route is recommended for taking the best picture of the illuminated bridge with the sunset and skyscraper in the background.

Last but not least, is a neat hidden spot at the Shibaura South Wharf Park. You can see the bridge from the bottom here, and at night catch a shot of the traditional pleasure boats passing closely by.

There are two 1.7 km walkways on the second deck called the Rainbow Promenade: the South route and North route are two separated walkways and do not connect on the bridge. From the north route, you can view the inner Tokyo harbour, the Tokyo Tower, and the Tokyo Skytree, while the south route offers a view of Tokyo Bay and, at times, even Mount Fuji.

As the bridge is freely accessible for the public, many tourists, joggers, and photographers are using these walkways. It takes about 20 to 30 minutes to cross the bridge on foot, though many visitors stop at the observation areas, where there are sitting benches to take in the view. The walkway is opened from 9am until 9pm in the summer (from April to October) and between 10am and 6pm in winter (from November to March), with last admission 30 minutes before closing time. It can get pretty windy on the bridge, so bring a nice warm jacket and leave your hat at home. When there are strong winds, the walkways may be closed.

Cycling across the Rainbow Bridge is forbidden, but you are able to walk your bicycles across with a wooden board with small wheels (free of charge). If you want to go cycling around Odaiba, you can start your walk across Rainbow bridge from the Shibauri Minami Futo Park.

The bridge is accessible on foot from Odaiba-Kaihinkoen and Shibaura-Futo Stations, or by taxi.

Summer (April to October): 9am to 9pm

Closed 3rd Monday of the month

Rainbow Bridge is a huge and beautiful suspension bridge in the northern part of Tokyo Bay, connecting Odaiba to central Tokyo. Odaiba is ultra-modern, manmade island that is incredibly popular with tourists. Since its opening in 1993, the brightly lid Rainbow Bridge has been one of the iconic symbols of Tokyo. It is prominently featured in photos and videos and used in many TV dramas and movies.