Sensoji (浅草寺, also known as Asakusa Kannon Temple) is a Buddhist temple located in Asakusa. It is one of Tokyo’s most colourful and popular temples.

The legend says that in the year 628, two brothers fished a statue of Kannon, the goddess of mercy, out of the Sumida River, and even though they put the statue back into the river, it always returned to them. Consequently, Sensoji was built nearby for the goddess of Kannon. The temple was completed in 645, making it Tokyo’s oldest temple.

Sensoji in the Modern Age 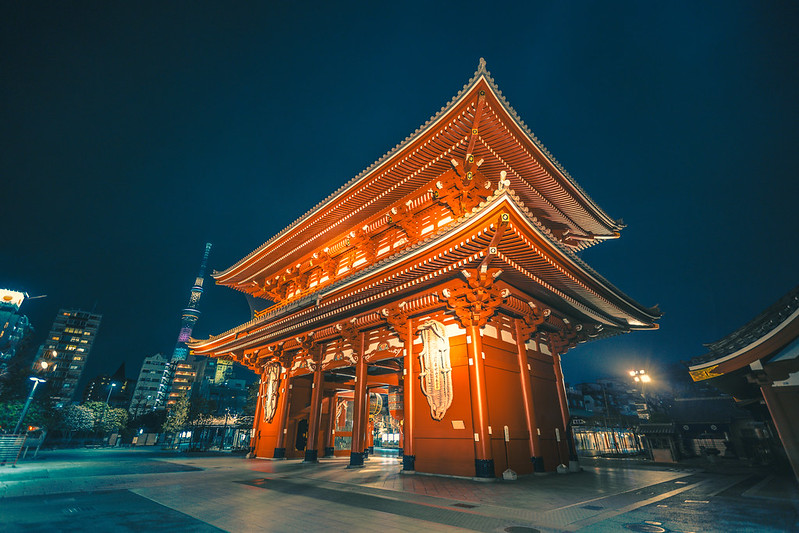 With the establishment of the new Meiji era, the Tokyo city government appropriated the temple grounds and pronounced the part containing the temple a public park. The remaining grounds were divided up into 6 zones, with the 6th zone (Rokku) just west of the temple becoming an entertainment district.

Sensoji was rebuilt several times due to fire and/or earthquake. However, Sensoji was unusual in surviving its second to last rebuilding, in 1649, for almost three centuries. But a World War Two air raid on March 10, 1945, destroyed it. The temple was rebuilt between 1951 and 1958. Also, in 1960 the main Kaminarimon Gate, which burnt down in 1865, was restored after 95 years. Hozomon Gate was reconstructed in 1964, and the five-story pagoda in 1973.

The massive, red Kaminarimon (“Thunder and Lightning Gate”) is the famous outermost gate of Sensoji Temple, and the Asakusa district’s best-known landmark. Kaminarimon is every tourist’s first stop in Asakusa and is the district’s most photographed spot. The gate is especially distinctive for the huge red lantern hanging inside it. Kaminarimon dates from the 10th century, built about 300 years after the temple was established. The size of the average Japanese house, Kaminarimon Gate is almost as wide (11.4 m, 37 ft) as it is high (11.7 m, 38 ft). 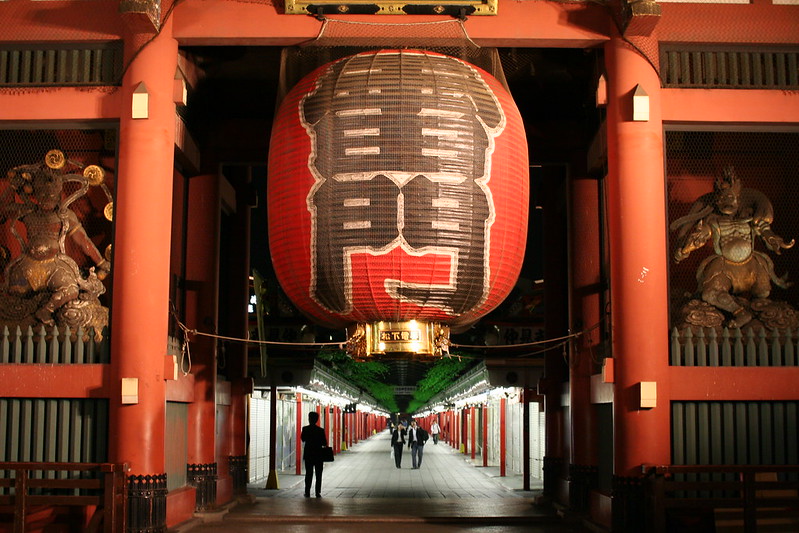 In the gate’s left alcove is a fearsome statue of the god of thunder and lightning, Raijin; on the right is his counterpart, the god of wind, Fujin: both Shinto rather than Buddhist deities. Another two statues depicting the same pair also defend the other side of the gate.

Kaminarimon has been rebuilt several times due to fire, the last rebuilding being in 1960. 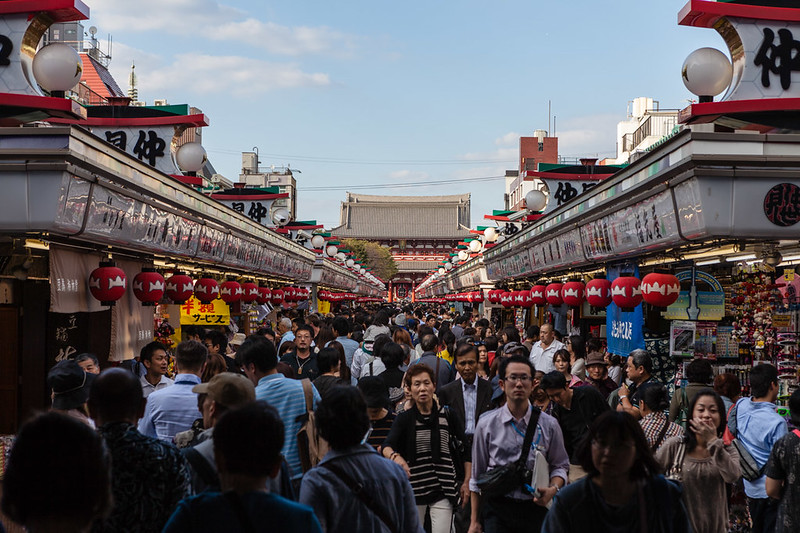 Enter through Kaminarimon, and you are in the always bustling and crowded Asakusa shopping street leading up to the temple, Nakamise-dori, lined with souvenir, snack and Edo-style craft shops. Nakamise-dori leads up to the second gate, the Hozomon Gate. 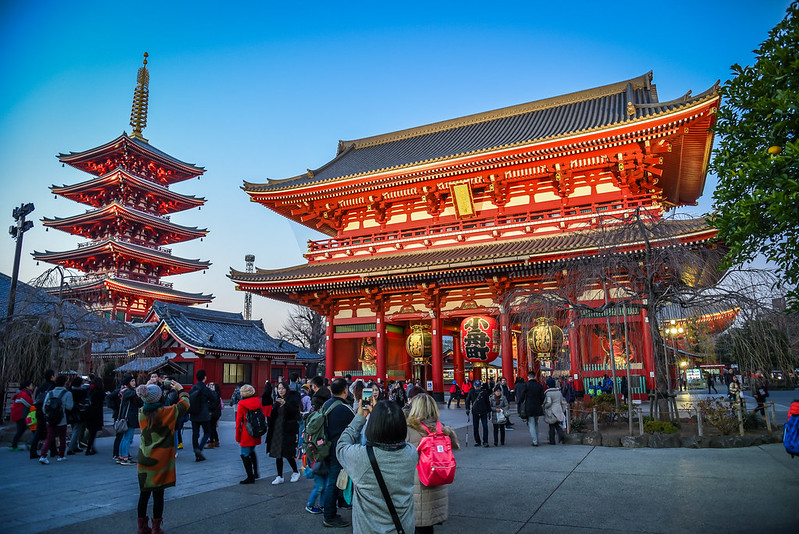 The gigantic Hozomon Gate (or “Niomon Gate”) stands at the end of Nakamise-dori just in front of the main temple hall, or Kannondo. At 21.7 meters (71 feet) high and 21.1 meters (69 feet) wide, Hozomon is almost double the size of the Kaminarimon Gate. Like Kaminarimon, it also has a huge paper lantern. On its rear, hang two huge waraji straw sandals belonging to the guardian deity Nio that the gate is named after and which are supposed to convey Nio’s fearsome size and strength. 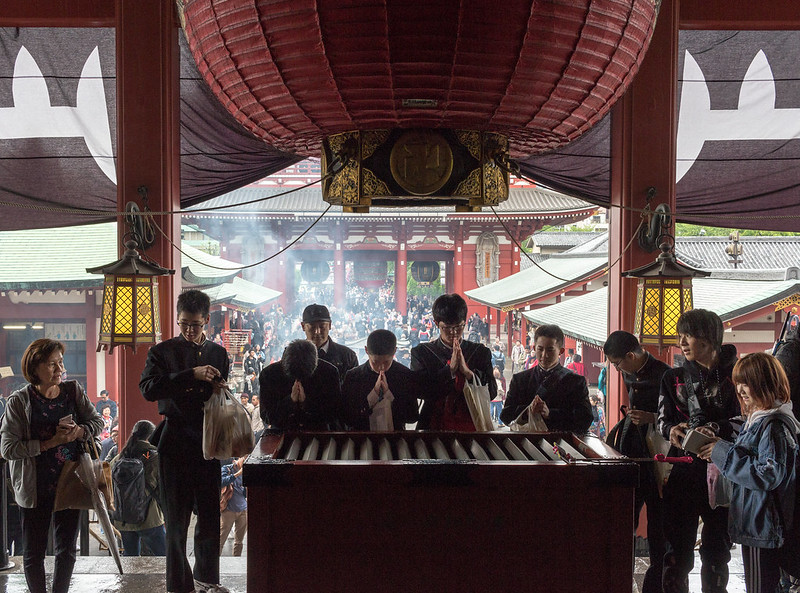 The red and white Kannondo Hall is Sensoji Temple’s main building, just past Hozomon Gate. The Kannondo was first built in 1651, destroyed in World War II and rebuilt in 1958. The hall is said to hold a golden image of the Goddess of Mercy (kannon) discovered by three fishermen in the 7th century. This discovery is what gave birth to the temple. In front of the temple building is a large cauldron of incense, smoke from which is believed to bestow good health. Here people waft the incense smoke over themselves.

To the left is a five-story, 48-meter (157 ft) high Goju-no-To (five-story pagoda), rebuilt in 1973 and modelled after a similar structure at Daigoji Temple in Kyoto. Near the pagoda is Dembo-in – a picturesque tea garden built in the 17th century by noted landscape gardener, Enshu Kobori (1579-1647). Although the garden is closed to the public, it may be possible to arrange a viewing by calling in advance at the temple’s main office.

To the right of the temple is the Asakusa Shrine, which miraculously escaped war-time bombs. The shrine was built on the orders of the third shogun Iemitsu in memory of the three fishermen and is the home shrine of the Sanja Matsuri held in May: Tokyo’s biggest and loudest festival.

From Tobu Line Asakusa Station, go out the Shomen (Front) ticket gate (not the Kita [North] gate), and go right. On exiting the building, cross the road, go immediately left, then take the first right, onto Kaminarimon-dori Avenue. Kaminarimon Gate is just 100 meters along, on your right.

From Ginza Line Asakusa Station, go out Exit 1, and go right. Kaminarimon Gate is just 60 meters along, on your right.

From Asakusa Line Asakusa Station, go out Exit A2-a. At the top of the exit’s stairs, go right and cross the road. Once you reach the other side of the road, take the pedestrian crossing to your left. Cross as far as the traffic island, then cross to your right. You should now be in front of a light-brown 13-floor apartment building with a grey stone base and dark-brown corners. Go past the left-hand side of the building in the same direction you just crossed the road. Kaminarimon Gate is at the end of this street, 200 meters in front of you.

From Tsukuba Line Asakusa Station go out the Kokusai-dori A exit. Take the fourth street on your left. You will see the sign for Sensoji Temple, which is 360 meters along.

Sensoji (浅草寺, also known as Asakusa Kannon Temple) is a Buddhist temple located in Asakusa. It is one of Tokyo's most colourful and popular temples.