The Sumo Museum – A Tribute to Japan’s Most Famous Sport 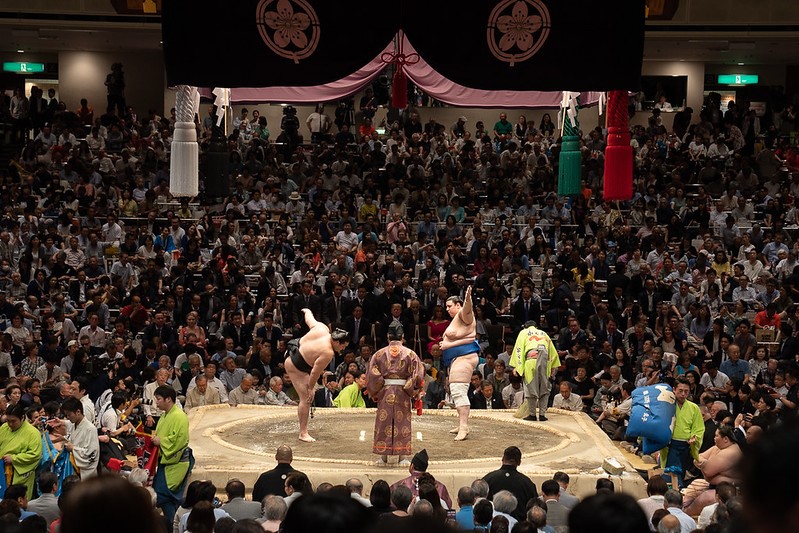 Ryogoku Kokugikan – A Stadium with a Museum

Sumo is perhaps the most famous sporting export of Japan. It is in equal parts an awesome athletic display and a tradition-laden spectacle that is sure to please any visitor who happens to catch one of the major tournaments spread throughout the calendar. In Tokyo’s famous sumo stadium called the Ryogoku Kokugikan, however, there is more to see than just the matches. To be frank, there is pretty much no reason to visit the Kokugikan Stadium unless you’re watching a sumo match. But if you are already at the Edo-Tokyo Museum next door, consider a very quick visit to the free sumo museum at the stadium.

The Sumo Museum (sumo kyokai) is in a small enclave of the stadium, is open year-round, and has free admission. Opened in 1954, it is a well-designed tribute to the famous sport. 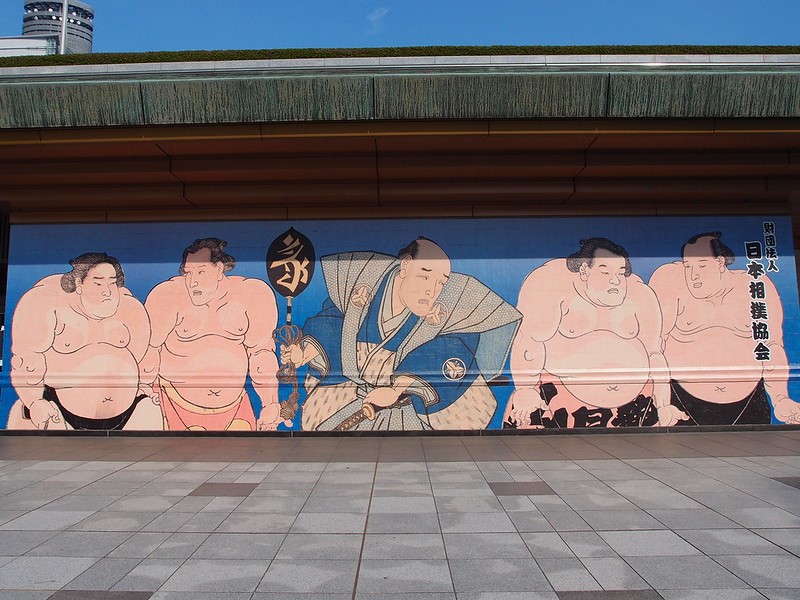 The museum’s exhibit changes every two months. Once there was a collection of woodblock paintings that date back to the mid-1700’s, in the late Tokugawa Period. This style of painting often depicted sumo wrestlers, beautiful women and warriors as themes, and notable artists from this genre include Utagawa Kunisada and Utagawa Kuniyoshi. The collection of paintings was intricate and beautiful, showing legendary sumo wrestlers of a bygone era in action and traditional dress. The museum also included a video detailing the most recent promotion of wrestler Harumafuji to Yokozuna (the highest rank in the sport), as well as a portrait wall honouring all 70 wrestlers in history who have attained the Yokozuna rank.

A Nice Added Bonus After Watching The Grand Sumo Tournament

The room may be small, and the variety of the displays might be limited, so a tour around the museum would probably take around half an hour at most. Perhaps this would differ according to the current exhibit, but the museum felt more like a nice accessory to a visit during a Grand Sumo Tournament than a tourist destination on its own merit. Tourists are recommended to add this location into a day planned around other events and locales in the area, such as the Edo Tokyo Museum. The area around Ryogoku Station itself has many sumo-related tributes and shops, and sumo wrestlers can be frequently seen walking around the area who may even be willing to pose for a photo if you ask nicely (not only is it polite, but these are not guys you want to have angry at you!).

That said, visitors seeking a taste of Japan’s national sport may still enjoy this tasteful and informative tribute. The museum has a respectful awe about it, enhancing the importance of the sport and its heritage. It is a great way to get a little taste of the history and importance of sumo. The museum showcases art and paraphernalia related to the world of sumo wrestling, including dolls, woodblock prints, and silk aprons worn by wrestlers. Given the lack of English-language captions, you might not learn too much here unless you are already familiar with the world or sumo or can read Japanese.

The Sumo Museum is open on weekdays from 10:00am-4:30pm. It is not open on weekends or national holidays, unless they fall within a sumo tournament in the same location, and then the museum can be accessed only by attendees to the sumo matches. Take note, however, that photography is not allowed in the museum.

Train: 2-minute walk from the west exit of Ryogoku Station on the JR Sobu line.

Subway: 5-minute walk from exit A3 of Ryogoku Station on the Toei Oedo line.

Sumo is perhaps the most famous sporting export of Japan. It is in equal parts an awesome athletic display and a tradition-laden spectacle that is sure to please any visitor who happens to catch one of the major tournaments spread throughout the calendar.